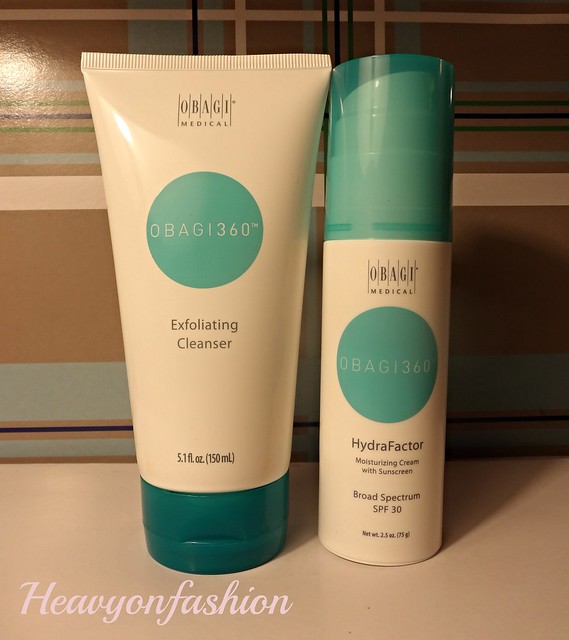 Hello, all my divas and gurus! I am so happy to bring you another great beauty review. I had the chance to dive into Obagi 360 Exfoliating cleanser and HydraFactor moisturizing cream.


I would like to thank the lovelies at  Obagi 360 for the opportunity to review these great
You can check out the entire Obagi 360 at
http://www.obagi.com/patients/product-line/obagi360-system

Popular posts from this blog

New Podcast Episode: New season Back to the fashion

April 06, 2021
Hello, all my divas and gurus! I am so happy to be back in the fashion game. The original mission of Heavy on Fashion is to showcase independent fashion designers and brands, talk about some fantastic beauty products, dive into the latest fashion news, product hauls and reviews, guides, great reads, and more. I am happy to be back on track! Stay tuned for some great fashion news, reviews, interviews, tips and tricks of the fashion biz, and more. So, seatback with a spoon full of Nutella and enjoy! Support the Heavy on Fashion Life Podcast - click the support me tab on Anchor at anchor.fm/heavyonfashion Or buy me a ko-if at ko-fi.com/heavyonfashion
Post a Comment
Click Here For More Heavy on Fashion !!!!!!!!

Heavy on Fashion at the Fashionista.com Panel Discussion in NYC

May 16, 2011
Hello all my Heavy On Fashion Readers, I am happy that I got the chance to attend the Fashionista.com:  How I’m Making It: What It Takes To Succeed In Fashion panel discussion on Monday, May 9th at the NYU Cantor Film Center. The panel was full of professionals in the Fashion Industry. Here is quick bio of the speakers at the panel Skye Parrott is the Photographer and Creative Director of  Dossier  Magazine. Katherine Krause is the Editor of  Dossier  Magazine. Gayle Dizon is a founder of Dizon Inc. Dizon is an acclaimed production company for some of the best fashion brands in the industry. Dizon Inc, is known for their fabulous fashion shows productions.   Cindy Krupp is the founder of the Krupp Group. Krupp Group is a public relations agency that works with tons of fashion designers including Chris Benz and tons of companies. Chris Benz is a well known American Fashion designer and columnist for Fashionista.com. Gayle Dizon,  Cindy Krupp, and Chris Benz give seriously
9 comments
Click Here For More Heavy on Fashion !!!!!!!!

May 13, 2014
Hello all my fashion divas and gurus! I am so happy to bring you a great new giveaway featuring Sol Republic Everyday Active Headphones.  Coming soon to Heavy on Fashion ...A @SOLREPUBLIC #giveaway ...stay tuned for more info A photo posted by Malanb (@heavyonfashion) on Apr 25, 2014 at 11:41am PDT The Sol Republic Everyday Active Headphones includes - 4 earbuds cushions of various sizes - 3 button control (volume button and mic) - sweat and water resistant  - light yet durable wire - comes in 5 different colors  I wrote about this fabulous headphones a couple months ago on my Valentine Day Gift Guide a few months back...Check it out here !  Here are my favorite features of these lovely everyday headphones: - love how durable these earbubs are  -They are great for in the gym or everyday life.  - I love how I can answer the phone with Sol Republic headphones and listen to music on my smartphone (Genius!) - The earbuds are very c
7 comments
Click Here For More Heavy on Fashion !!!!!!!!